St. James Cemetery was and is a church cemetery, created for the members and adherents of this congregation. Therefore, the history of the cemetery remains closely intertwined with the changes and evolutions of the church. Early in the 1830's and possibly before, Methodist ministers came to Victoria (now Stroud) holding church services which in those days was referred to as going to meeting. The site for the first chapel was donated by Mr. Peter Lawrence in 1851, 3/4 of an acre situated on the north half of lot 15, concession 9, in trust for the Wesleyan Methodist Church of Canada. The first Methodist chapel of plank and plaster construction was erected in 1852, complete with benches, a few chairs and candles set on wall brackets.

In January 1853, plans were made to fence a plot of land for a cemetery, the fence being 52 rods in length, made of wooden pickets with 2 gates. The contractor was to receive 17 pounds, 10 pence and to have it completed by June. In 1864, a brick church was built in front of the old one, which was then used for Sabbath School and prayer meetings. In the fall of 1905, the Methodist Church buildings were destroyed by fire but by November 1906 the present edifice was officially opened on property opposite to the cemetery. 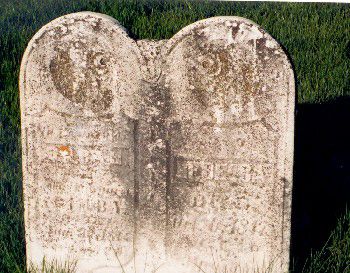 Nearby to the plank chapel and about 20 feet from the cairn are the first known burials, those of Sarah Gimby who died Aug. 30,1842 at age 11 and her sister, Rebecca who died on Oct. 6, 1847 at age 3. These children were the daughters of James Gimby of Gimbys Corners, now Churchill.

Many Innisfil Pioneer Methodist families were buried here including: Alexander Gartley, strong supporter of the Wesleyan Methodist Church, Wm. J. Soules of Big Bay Point, John Soules aged 22 died in Sept 1853, Samuel Wice pioneer of the Wice family from Markham, John Chantler and family, supporters of the Methodist church since 1852. Robert Orchard, teacher at Victoria/Stroud School , died at age 37 in 1865 and was also a lay preacher of this congregation. His brother, William Orchard died at age 54,and was the choir leader of the Wesleyan Methodist choir.


A number of former soldiers are buried in the cemetery:
William McCullough -as a young man was a cavalry man in the British Army fighting in 20 battles during the Napoleonic wars, and was wounded at the Battle of Waterloo causing him to be lame for the rest of his life.

Barnett Vandenburgh, a lieutenant in York Militia fought in the war of 1812 and was present at the Battle of Queenston Heights, Oct. 1812.It is said that he helped to carry General Isaac Brock from the battlefield.

John Long served in government forces in the rebellion of 1837.

Charles Warnica served in the Northern Army in the US civil war. He was killed in Louisville, Kentucky in June 1865 shortly before the end of the war when he was still 16 years old and was sent home for burial as American soldiers often are.

Howard Andrews served in the Canadian Expeditionary Force in World War 1, and died Oct 21, 1918 shortly before the war ended and is buried at home.

Alvin Webb, a veteran of World War 1, died in 1949, many years after the war ended, a member of a family who has been active in this congregation for many generations.

In 1925, following church union, the name St. James United Church Cemetery was officially adopted. The cairn was erected in 1931 in memory of the pioneers of our church and community. It was the gift of Lt. Colonel M B Peacock of Calgary, a great grandson of the pioneer John Peacock. A large gathering of the community and church clergy were present on August 16, 1931 for the service of dedication. As well the gates, donated by Samuel Gordon, were dedicated that same day.Mr John Samuel Wice, Chairman of the committee in charge, reportedly deposited various records and documents inside the cairn. In 1996, the deterioration of the cairns stone and mortar exterior became apparent and the Peacock family generously contributed to its restoration.

The original cemetery was increased in size in 1881 when an acre was purchased from George W. Duncan for$100 .In Nov.1944, a 1/2 acre parcel of land was purchased from Mr. Wm. J. Smythe for $200, thus enlarging the western side of the cemetery to its present size. In 1977, this section was surveyed, creating 460 new gravesites. In 1983, the first burial occurred in this new section.

The earliest slab limestone and white marble monuments are showing the deleterious effects of time, causing the lettering to be almost illegible. Rubbing chalk or wetting the letters helps make the letters more readable. In the late 1800s, granite began to be used for monuments and is reported to have a life span of 9 to 10,0000 years .The prevailing style of the early 1900s consisted of many of the taller, ornate columns in our cemetery, some with vases, scroll work or other artistic details.The newer western section of the cemetery consists of smaller, simpler granite headstones often personalized with etchings or individualized epitaphs.

For the first 100 years of this cemeterys existence, graves were dug by hand, which was often handled by family members of the deceased. In the 1930s, records indicate that graves were dug by hand for $6.00 each. Today, a back hoe accomplishes this task, under the close scrutiny of the cemetery manager, at a charge of $450 in summer and $550 in winter. In 1952, a cement vault for winter storage of loved ones was built. Recently, the use of modern machinery and more temperate winters has allowed year round burials to occur when possible, although this is not advisable in the older section where room to manoeuvre is a challenge.

To date of the approximately 2500 gravesites, only 300 remain unsold.The first columbarium was erected in 1994, a sign of the times with cemetery space now being finite. This structure is composed of 48 niches with the capacity to hold 2 or 3 urns per niche, thus offering the modern alternative to burials. A second columbarium was added in 2004 .The addition of 2 benches in the summer of 2005 has significantly enhanced the surrounding area. 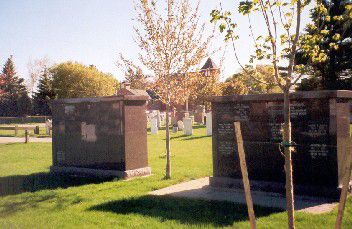 Careful record keeping of family plot and niche purchases continues to be of vital significance. As well, the care and maintenance of the existing stones and property must be closely supervised. The governing body of the cemetery is the Cemetery Board, consisting of volunteer members holding positions such as Cemetery Manager, Chairperson, Treasurer and Secretary. Under the Cemetery Act, a portion of all plot and niche purchases allows for the perpetual care of the cemetery. In earlier times, $1 to $2 was collected per year from families for maintenance purposes. In 1930, the system of endowed plots was begun. Minutes of past cemetery board meetings indicate that in the 1940s, grass was cut by hand mower for $11 per cutting while currently the board pays$280 plus G.S.T. per cutting. In the 1970s, the ministry requested that all rules and regulations of the Cemetery Act be adhered to and at that time, a cheque for $7000 was forwarded to the public trustee to cover the endowment for plot sales since the inception of the cemetery. Only the interest is annually returned to the cemetery board to offset the costs of lawn cutting and repairs to gravesites. As was discovered in 1991, St.James Cemetery is not immune to vandalism.124 monuments were damaged in some way that fateful October. Restoration and repairs were carried out with paid and volunteer help. In 1999, over $5000 was spent on a very thorough rehabilitation of the cemeterys grass and trees, again much of the intensive labour done by volunteers. In 2002, approximately $3500 was spent installing proper bases under leaning monuments and straightening them. In most cases, no known descendants survive to assist in this endeavour.

Because it is a church cemetery, the St. James Cemetery Board has historically assisted the church financially when urgent needs were presented. Some specific instances through the decades include contributions to Sunday school furniture, hymnals, topsoil to start a new portion of church lawn, storm windows, and parking lot gravel.

At present, ongoing donations by descendants of many buried in our cemetery help support the annual maintenance and capital improvements which have been postponed or delayed until such time as financial resources become available.

When a cemetery reaches the age of St. James, that is 150 years since the first church was built (but 160 since the first recorded burial), there is much to celebrate. Let us give thanks to all those who faithfully kept the precise records, wisely oversaw the management of its finances, laboriously maintained its well kept appearance and insightfully planned for the future of those who wish to have St James Cemetery, Stroud as their final resting place.

Cemetery Restoration
During the summer of 2009, 55 pioneer limestone markers were refurbished. All had new bases poured while some had stainless steel u-channel rods attached to their sides. This was made possible by the generous grant awarded through the Town of Innisfil's Community Reinvestment Fund.
705.436.5225
website@stjamesunited.org