An Abbreviated Version of the History of St. James

As eary as the1830's Methodist ministers came to Victoria (now Stroud) to hold church services, which in those days was referred to as "going to meeting" . Victoria was home to one of the 7 Wesleyan Methodist Church congregations who formed the Innisfil Circuit. 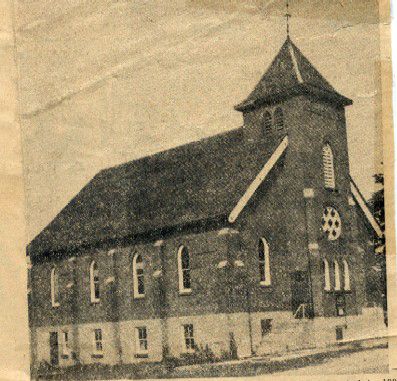 The site for the first chapel was donated by Mr. Peter Lawrence in 1851. It was .75 of an acre situated on the north half of Lot 15, Concession 9, in trust for the Wesleyan Methodist Church of Canada. This first Methodist chapel of plank and plaster construction was erected in 1852, complete with benches, a few chairs and candles set on wall brackets. Within a few years, the building became too small to accommodate the 50 to 60 persons who atteneded regularly.

A brick church, 56 feet long, 40 feet wide and 20 feet high, was built by contractor William Orchard with the bricks drawn from the Warnica property. On April 23, 1864 the cornerstone was laid. The old chapel had been moved back and was later attached to the new one by a short passage. It was estimated that the church would hold up to 400 persons and was frequently filled to capacity. The first wedding in the brick church was that of Miss Abigail Warnica and Mr. John Carr. Singing was led with the aid of a tuning fork, with an organ being purchased in 1864. Pew rent was set at $2.00, paid quarterly in advance.

In the summer of 1875, the "finest Methodist parsonage within 100 miles of Toronto" was built at a total cost of $3614, including cistern, well, stable and cistern pump. Over the years, much remodeling, painting and wall papering was done as needed for the many ministers and their families who called this fine old building home. In 1973, the minister expressed a desire to have a home of his own choosing and the manse was sold. 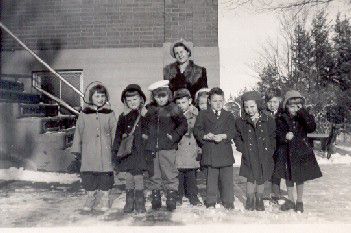 By 1880, Victoria became known as Stroud, which was noted as being "the leading congregation of the 7-point charge." In 1886, a new communion set was purchased for $7.00.During the night of November 29-30, 1905, a fire of unknown origin destroyed the Methodist Chapel in our present cemetery. A meeting of the congregation was called 4 days later, and it was decided to build a new church. Mr. Hamilton Young agreed to sell a strip of land, 40 by 100 across the road from the cemetery for $100. The new church was dedicated on Friday, November 30, 1906. The seating was described as most comfortable. Also a furnace and acetylene light plant were installed. During the next decade, additional property was added so that a shed for buggies and horses could be erected at a cost of $1140. 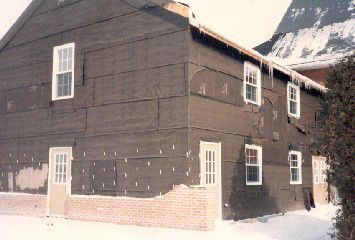 In 1925 a significant event occurred for Stroud Methodist Church when the United Church of Canada was formed by the union of the Methodist, Congregational and approximately 2/3 of the Presbyterian churches along with about 1200 Union churches. A number of families from Stroud Presbyterian Church joined the congregation at that time. Since then, carefully recorded minutes of the meetings of the Stewards and Elders of St. James United Church have documented the issues and concerns of the passing years. The original books have been donated to the Simcoe County Archives while copies are available in the church library.

Changes to the original building: The building, 100 years old in 2006, has been well maintained with electricity installed in 1933, a well dug in 1959 and flush toilets added in 1961.The most significant addition to the structure was the enlarged modern kitchen and the single storey Christian Education wing in 1964, which was expanded to a two-storey addition in 1987. In 1979, the original concrete steps to both front entrances were removed and replaced and an enclosed structure was designed. Church spires were affixed to the roof in 1996. In 2002, newly designed windows, sponsored by many families within the church, were dedicated. In 2005, the carpeting was replaced in the sanctuary and narthex. In 2007, new tile was installed in the basement to replace well worn carpet and also an illuminated outdoor information sign was installed. 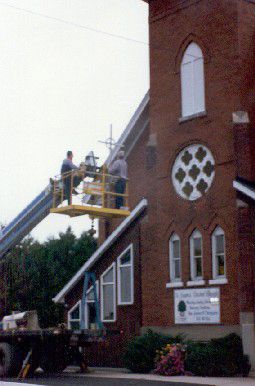 Congregation: The congregational structure of elders, stewards and trustees was replaced in September 1972 by our present committee system.During the last 6 decades the congregation has changed from a predominantly rural population of farmers and small business folk to a great variety of occupations, many of whom are commuters. With the establishment of Sandycove Acres in 1971 came a great increase in membership to St James.

Fundraising The faith that inspired members in years past to repeatedly offer their time, treasures and talents lives on with the June Strawberry Supper being the highlight of the summer season. Whether preparing salads, setting tables, serving the masses or picking berries, many hands willingly contribute and ensure the success of this annual venture. Other fun filled occasions have included Mervin and Audrey Booths bus trips to theatre productions, gardens, and fall colours, as well as Awesome Auctions, garage sales, cookie exchanges, travelling dinners, cheese and meat pie sales all opportunities for church members and the community to meet and socialize.

Sunday School In the 1950s, the average Sunday School attendance exceeded 115 children. Whereas Sunday School classes were held after church in 1952, the current practice is to have children withdraw to Sunday School during the morning service.